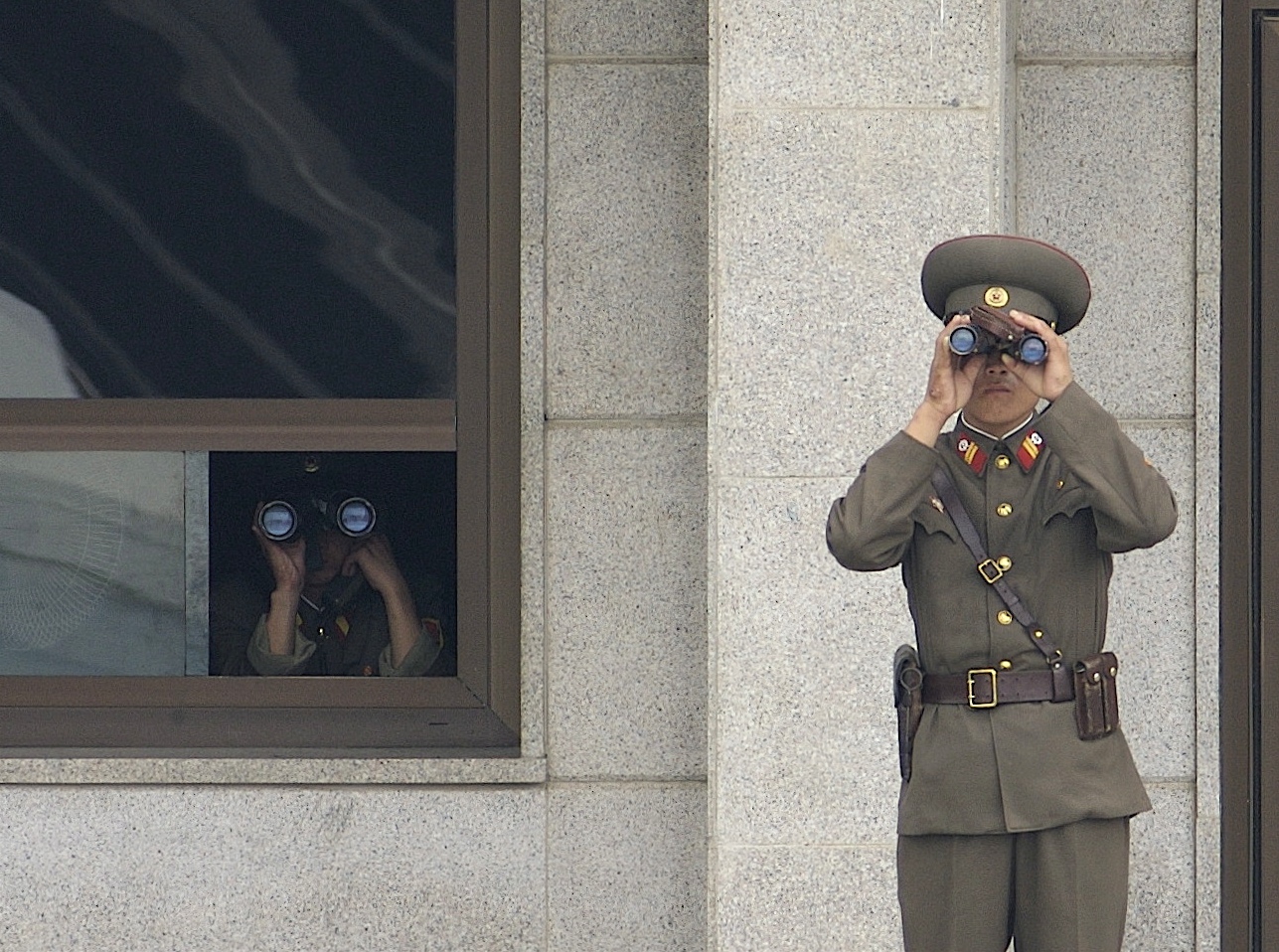 It’s probably safe to assume that clothing designed by committee will be more utilitarian and drab than that from the colored pencils of say Yves Saint Laurent, Tom Ford, Giorgio Armani or Coco Chanel.

So, imagine what clothing would look like if it was designed by the Apparel Research Center, a sub-subcommittee of the Clothing Industry Department, itself a sub-committee of the National Industry Committee. Yes, welcome to the strange, centrally planned and tightly controlled world of our favorite rogue nation, North Korea. Imagine no more as Paul French takes us on a journey through daily life in North Korea, excerpted from his new book North Korea: State of Paranoia by Paul French. It makes for sobering reading.

6am The day starts early in Pyongyang, the city described by the North Korean government as the “capital of revolution”. Breakfast is usually corn or maize porridge, possibly a boiled egg and sour yoghurt, with perhaps powdered milk for children.

Then it is time to get ready for work. North Korea has a large working population: approximately 59% of the total in 2010. A growing number of women work in white-collar office jobs; they make up around 90% of workers in light industry and 80% of the rural workforce. Many women are now the major wage-earner in the family – though still housewife, mother and cook as well as a worker, or perhaps a soldier.

Makeup is increasingly common in Pyongyang, though it is rarely worn until after college graduation. Chinese-made skin lotions, foundation, eyeliner and lipstick are available and permissible in the office. Many women suffer from blotchy skin caused by the deteriorating national diet, so are wearing more makeup. Long hair is common, but untied hair is frowned upon.

Men’s hairstyles could not be described as radical. In the 1980s, when Kim Jong-il first came to public prominence, his trademark crewcut, known as a “speed battle cut”, became popular, while the more bouffant style favoured by Kim Il-sung, and then Kim Jong-il, in their later years, is also popular. Kim Jong-un’s trademark short-back-and-sides does not appear to have inspired much imitation so far. Hairdressers and barbers are run by the local Convenience Services Management Committee; at many, customers can wash their hair themselves.

Fashion is not really an applicable term in North Korea, as the Apparel Research Centre under the Clothing Industry Department of the National Light Industry Committee designs most clothing. However, things have loosened up somewhat, with bright colours now permitted as being in accordance with a “socialist lifestyle”. Pyongyang offers some access to foreign styles. A Japanese watch denotes someone in an influential position; a foreign luxury watch indicates a very senior position. The increasing appearance of Adidas, Disney and other brands (usually fake) indicates that access to goods smuggled from China is growing. Jeans have at times been fashionable, though risky – occasionally they have been banned as “decadent”, along with long hair on men, which can lead to arrest and a forced haircut.

One daily ritual of all North Koreans is making sure they have their Kim Il-sung badge attached to their lapel. The badges have been in circulation since the late 1960s, when the Mansudae Art Studio started producing them for party cadres. Desirable ones can change hands on the black market for several hundred NKW. In a city where people rarely carry cash, jewellery or credit cards, Kim badges are one of the most prized targets of Pyongyang’s pickpockets.

Most streets are boulevards of utilitarian high-rise blocks. Those who live on higher floors may have to set out for work or school a little earlier than those lower down. Due to chronic power cuts, many elevators work only intermittently, if at all. Many buildings are between 20 and 40 storeys tall – there are stories of old people who have never been able to leave. Even in the better blocks elevators can be sporadic and so people just don’t take the chance. Families make great efforts to relocate older relatives on lower floors, but this is difficult and a bribe is sometimes required. With food shortages now constant, many older people share their meagre rations with their grandchildren, weakening themselves further and making the prospect of climbing stairs even more daunting.

Some people do drive to work, but congestion is not a major problem. Despite the relative lack of cars, police enforce traffic regulations strictly and issue tickets. Fines can be equivalent to two weeks’ salary. Most cars belong to state organisations, but are often used as if they were privately owned. All vehicles entering Pyongyang must be clean; owners of dirty cars may be fined. Those travelling out of Pyongyang require a travel certificate. There are few driving regulations; however, on hills ascending vehicles have the right of way, and trucks cannot pass passenger cars under any circumstances. Drunk-driving is punished with hard labour. Smoking while driving is banned on the grounds that a smoking driver cannot smell a problem with the car.

Those who have a bicycle usually own a Sea Gull, unless they are privileged and own an imported second-hand Japanese bicycle. But even a Sea Gull costs several months’ wages and requires saving.

7.30am For many North Koreans the day starts with a 30-minute reading session and exercises before work begins. The reading includes receiving instructions and studying the daily editorial in the party papers. This is followed by directives on daily tasks and official announcements.

For children, the school day starts with exercises to a medley of populist songs before a session of marching on the spot and saluting the image of the leader. The curriculum is based Kim Il-sung’s 1977 Thesis on Socialist Education, emphasising the political role of education in developing revolutionary spirit. All children study Kim Il-sung’s life closely. Learning to read means learning to read about Kim Il-sung; music class involves singing patriotic songs. Rote learning and memorising political tracts is integral and can bring good marks, which help in getting into university – although social rank is a more reliable determinant of college admission. After graduation, the state decides where graduates will work.

8am Work begins. Pyongyang is the centre of the country’s white-collar workforce, though a Pyongyang office would appear remarkably sparse to most outsiders. Banks, industrial enterprises and businesses operate almost wholly without computers, photocopiers and modern office technology. Payrolls and accounting are done by hand.

12pm Factories, offices and workplaces break for lunch for an hour. Many workers bring a packed lunch, or, if they live close by, go home to eat. Larger workplaces have a canteen serving cheap lunches, such as corn soup, corn cake and porridge. The policy of eating in work canteens, combined with the lack of food shops and restaurants, means that Pyongyang remains strangely empty during the working day with no busy lunchtime period, as seen in other cities around the world.

Shopping is an as-and-when activity. If a shop has stock, then returning later is not an option as it will be sold out. According to defectors, North Koreans want “five chests and seven appliances”. The chests are a quilt chest, wardrobe, bookshelf, cupboard and shoe closet, while the appliances comprise a TV, refrigerator, washing machine, electric fan, sewing machine, tape recorder and camera. Most ordinary people only have a couple of appliances, usually a television and a sewing machine.

Food shopping is equally problematic. Staples such as soy sauce, soybean paste, salt and oil, as well as toothpaste, soap, underwear and shoes, sell out fast. The range of food items available is highly restricted. White cabbage, cucumber and tomato are the most common; meat is rare, and eggs increasingly so. Fruit is largely confined to apples and pears. The main staple of the North Korean diet is rice, though bread is sometimes available, accompanied by a form of butter that is often rancid. Corn, maize and mushrooms also appear sometimes.

Image: Soldiers from the Korean People’s Army look south while on duty in the Joint Security Area, 2008. Courtesy of U.S. government.