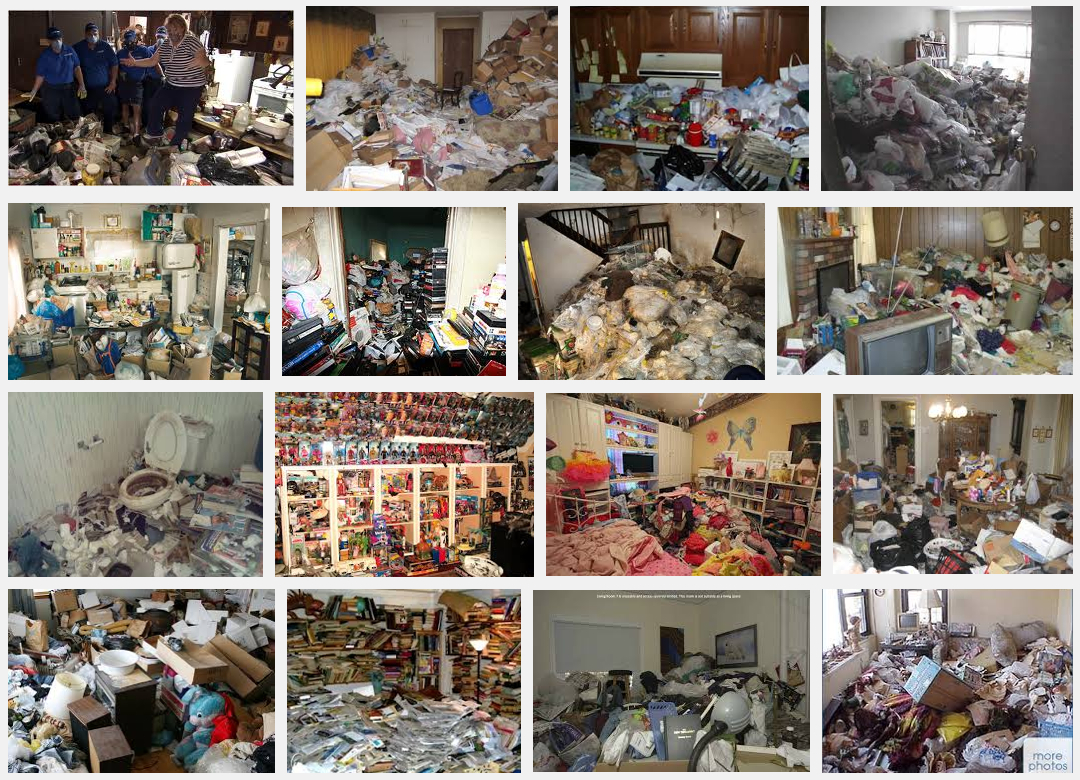 Having only just recently re-located to Colorado’s wondrous Front Range of the Rocky Mountains, your friendly editor now finds himself surrounded by figurative, less-inspiring mountains: moving boxes, bins, bags, more boxes. It’s floor to ceiling clutter as far as the eye can see.

So, here’s a very timely story on the psychology of clutter and hoarding.

Jennifer James and her husband don’t have a lot of clutter—but they do find it hard to part with their children’s things. The guest cottage behind their home in Oklahoma City is half-filled with old toys, outgrown clothing, artwork, school papers, two baby beds, a bassinet and a rocking horse.

“Every time I think about getting rid of it, I want to cry,” says Ms. James, a 46-year-old public-relations consultant. She fears her children, ages 6, 8 and 16, will grow up and think she didn’t love them if she doesn’t save it all. “In keeping all this stuff, I think someday I’ll be able to say to my children, ‘See—I treasured your innocence. I treasured you!’ “

Many powerful emotions are lurking amid stuff we keep. Whether it’s piles of unread newspapers, clothes that don’t fit, outdated electronics, even empty margarine tubs, the things we accumulate reflect some of our deepest thoughts and feelings.

Now there’s growing recognition among professional organizers that to come to grips with their clutter, clients need to understand why they save what they save, or things will inevitably pile up again. In some cases, therapists are working along with organizers to help clients confront their psychological demons.

“The work we do with clients goes so much beyond making their closets look pretty,” says Collette Shine, president of the New York chapter of the National Association of Professional Organizers. “It involves getting into their hearts and their heads.”

For some people—especially those with big basements—hanging onto old and unused things doesn’t present a problem. But many others say they’re drowning in clutter.

“I have clients who say they are distressed at all the clutter they have, and distressed at the thought of getting rid of things,” says Simon Rego, director of psychology training at Montefiore Medical Center in Bronx, N.Y., who makes house calls, in extreme cases, to help hoarders.

In some cases, chronic disorganization can be a symptom of Attention Deficit Hyperactivity Disorder, Obsessive-Compulsive Disorder and dementia—all of which involve difficulty with planning, focusing and making decisions.

The extreme form, hoarding, is now a distinct psychiatric disorder, defined in the new Diagnostic and Statistical Manual-5 as “persistent difficulty discarding possessions, regardless of their value” such that living areas cannot be used. Despite all the media attention, only 2% to 5% of people fit the criteria—although many more joke, or fear, they are headed that way.

Difficulty letting go of your stuff can also go hand in hand with separation anxiety, compulsive shopping, perfectionism, procrastination and body-image issues. And the reluctance to cope can create a vicious cycle of avoidance, anxiety and guilt.

In most cases, however, psychologists say that clutter can be traced to what they call cognitive errors—flawed thinking that drives dysfunctional behaviors that can get out of hand.

Among the most common clutter-generating bits of logic: “I might need these someday.” “These might be valuable.” “These might fit again if I lose (or gain) weight.”

“We all have these dysfunctional thoughts. It’s perfectly normal,” Dr. Rego says. The trick, he says, is to recognize the irrational thought that makes you cling to an item and substitute one that helps you let go, such as, “Somebody else could use this, so I’ll give it away.”

He concedes he has saved “maybe 600” disposable Allen wrenches that came with IKEA furniture over the years.

The biggest sources of clutter and the hardest to discard are things that hold sentimental meaning. Dr. Rego says it’s natural to want to hang onto objects that trigger memories, but some people confuse letting go of the object with letting go of the person.

Linda Samuels, president of the Institute for Challenging Disorganization, an education and research group, says there’s no reason to get rid of things just for the sake of doing it.

“Figure out what’s important to you and create an environment that supports that,” she says.

Robert McCollum, a state tax auditor and Ms. James’s husband, says he treasures items like the broken fairy wand one daughter carried around for months.

“I don’t want to lose my memories, and I don’t need a professional organizer,” he says. “I’ve already organized it all in bins.” The only problem would be if they ever move to a place that doesn’t have 1,000 square feet of storage, he adds.

Sometimes the memories people cling to are images of themselves in different roles or happier times. “Our closets are windows into our internal selves,” says Jennifer Baumgartner, a Baltimore psychologist and author of “You Are What You Wear.”

“Say you’re holding on to your team uniforms from college,” she says. “Ask yourself, what about that experience did you like? What can you do in your life now to recapture that?”

Somebody-might-need-this thinking is often what drives people to save stacks of newspapers, magazines, outdated electronic equipment, decades of financial records and craft supplies. With a little imagination, anything could be fodder for scrapbooks or Halloween costumes.

For people afraid to toss things they might want in the future, Dr. Baumgartner says it helps to have a worst-case scenario plan. “What if you do need that tutu you’ve given away for a Halloween costume? What would you do? You can find almost anything on eBay.

Life coach Jayne Morris suggests that de-cluttering your desk, attic or garage can add positive energy to your personal and business life. Morris has coached numerous business leaders and celebrities in the art of clearing clutter.

According to a leading expert, having a cluttered environment reflects a cluttered mind and the act of tidying up can help you be more successful.

The advice comes from Jayne Morris, the resident “life coach” for NHS Online, who said it is no good just moving the mess around.

In order to clear the mind, unwanted items must be thrown away to free your “internal world”, she said.

Ms Morris, who claims to have coached celebrities to major business figures, said: “Clearing clutter from your desk has the power to transform you business.

“How? Because clutter in your outer environment is the physical manifestation of all the clutter going on inside of you.

“Clearing clutter has a ripple effect across your entire life, including your work.

“Having an untidy desk covered in clutter could be stopping you achieving the business success you want.”

She is adamant cleaning up will be a boon even though some of history’s biggest achievers lived and worked in notoriously messy conditions.

Churchill was considered untidy from a boy throughout his life, from his office to his artist’s studio, and the lab where Alexander Fleming discovered penicillin was famously dishevelled.

Among the recommendations is that the simply tidying a desk at work and an overflowing filing cabinet will instantly have a positive impact on “your internal world.”

Anything that is no longer used should not be put into storage but thrown away completely.

Keeping something in the loft, garage or other part of the house, does not help because it is still connected to the person “by tiny energetic cords” she claims.

She said: “The things in your life that are useful to you, that add value to your life, that serve a current purpose are charged with positive energy that replenishes you and enriches your life.

“But the things that you are holding on to that you don’t really like, don’t ever use and don’t need anymore have the opposite effect on your energy. Things that no longer fit or serve you, drain your energy.”

Briton has long been a nation of hoarders and a survey showed that more than a million are compulsive about their keeping their stuff.

Brains scans have also confirmed that victims of hoarding disorder have abnormal activity in regions of the brain involved in decision making – particularly in what to do with objects that belong to them.