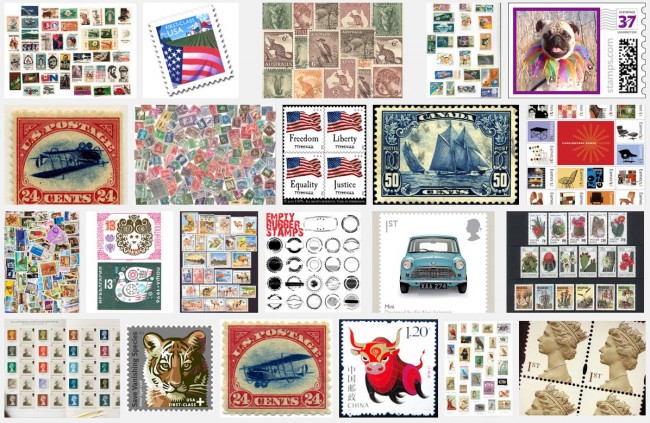 Sadly for philatelists and aficionados of these sticky, miniature works of art, stamps may be doomed to the same fate as cassette tapes, vinyl disks, 35mm film, floppy drives, and wrist watches.

It could easily be a glorious Pharaonic tomb, stocked with all the sustenance a philatelist might require for the afterlife. The William H. Gross Stamp Gallery, which opened on Sunday here at the Smithsonian National Postal Museum, includes an $18 million array of display spaces, artifacts, trays and touch screens. Its 20,000 items have been culled from more than 6 million at the museum, one of the world’s great collections. And the gallery’s 12,000 square feet are devoted to a single object that seems on the brink of extinction: the postage stamp.

But why should those of us who have never been consumed by the desire to hunt down a rare Inverted Jenny or a Brazilian Bull’s-eye give stamps (or their extinction) much attention? For most of us, they are utilitarian: we lick or peel, stick and use. And if, like me, you find a serious drop-off in the aesthetic values of American stamps in recent decades, what inspiration is there for collecting or contemplation? Why care that neither rain nor snow nor gloom of night are any longer the main hurdles for snail mail’s continuing rounds?

The Post Office has been struggling to reinvent itself, reeling from deficits and awaiting rescue. Maybe that’s why many recent stamps seem so hyped-up and saturated with color: they are straining to cheer up mail carriers, as well as customers.

But this new exhibit space provides more vigorous cheer. It is the world’s largest stamp gallery, we are told, made possible by a $10 million gift from William H. Gross, founder of the investment company Pimco. And surprisingly, until now, the National Postal Museum has had no major philatelic display showing off its collection; its main galleries focus on mail technology and delivery, not its sticky symbols. You might not begin collecting stamps immediately after a visit to their new home (though every visitor will get a head start with a selection of six free stamps), but you will start to think differently about them. Their current inconsequence is a far cry from the trust and influence they once possessed.

The Postmaster General, for example, was once so powerful that the position was included in the president’s cabinet. The mails were once the nation’s premier courier; in 1958, even the priceless Hope diamond was entrusted to the Postal Service for a cost of $145.29, including $1 million worth of insurance. (The heavily stamped and metered envelope is here; the diamond is nearby, at the Natural History Museum.)

And stamp images once had so much authority that in 1901, an engineer opposed to the digging of a Nicaraguan canal scared United States senators by presenting each with a Nicaraguan stamp showing the eruption of the nearby Mount Momotombo; the canal was dug in Panama instead.

We see, too, how mail delivery affected all modes of transportation. Nineteenth-century ocean liners could carry passengers because they were heavily subsidized by government mails. The RMS Titanic was so called because it was a Royal Mail Ship: we see a rusty set of mail keys, found on the drowned body of the Titanic’s sea post clerk.

The museum’s philatelic curator, Cheryl R. Ganz, explores the full range of stamps’ importance. Some are collector’s “gems,” including the famous Inverted Jenny stamp of 1918, in which a flying biplane was printed upside down on a single sheet of 100 stamps. There are discussions of delivery methods (in 1929, seaplanes carrying mail were catapulted off ocean liners); disasters (the Church Street post box damaged on Sept. 11 is here); and counterfeits (Jean de Sperati, once the “world’s most famous stamp forger,” was arrested in France in 1943 “for exporting rare stamps without a license,” but he beat the charge by proving that the stamps were his own forgeries).

There are also primers on stamp preservation, manufacture and design. On a touch-table, you can survey American stamps released since World War II, then e-mail a selection. One wall is lined with photographs of famous stamp collectors, offering riddlers untapped possibilities: How was Charlie Chaplin like Ayn Rand? What did Franklin Delano Roosevelt share with John Lennon?

Collectors, we see too, are entranced by the stamp’s physical trace, the path it takes through the world. And many have arrived here. Even the most experienced philatelist will find wonders in hundreds of sliding vertical frames that can be pulled out from the walls. One room offers an in-depth survey of American stamps; another space provides a broad international sampling.

It seems impossible to halt the spread of random acts of senseless kindness. This is a good thing. The latest good deeds come courtesy of Hannah Brencher and her army, which now numbers over 10,000 strong. What Hannah does is simple — she writes happy letters to strangers. What began as a sole endeavor is now a growing movement, replete with a starter kit for novice letter-writers, a TED (Technology Entertainment and Design) presentation, and its own website, of course, at The World Needs More Love Letters.

When 24-year-old Hannah Brencher moved to New York after college, she was hit by depression and overwhelming loneliness. One day she felt so alone, she wanted to reach out to someone. And so she put pen to paper and started writing letters. Letters to complete strangers.

But these weren’t sad letters about how she was feeling. They were happy letters, all about the other person, not her. She would write messages for people to have a “bright day” and tell strangers how brilliant they were, even if they thought no one else had noticed. Brencher began dropping the notes all over New York, in cafes, in library books, in parks and on the subway. It made her feel better, knowing that she might be making somebody’s day through just a few short, sweet words. It gave her something to focus on. And so, The World Needs More Love Letters was born.

The World Needs More Love Letters is all about writing letters – not emails, but proper, handwritten letters. Not conventional love letters, written to a real beloved, but surprise letters for strangers. They don’t necessarily say “I love you”, but they are full of kindness (that’s the love Brencher’s talking about) – telling people they are remarkable and special and all-round amazing. It’s the sort of stuff that most people don’t really say out loud even to the people they care about, let alone a total stranger.

Brencher’s initiative has now exploded. She has personally written hundreds, if not thousands of letters. Last year, she did a Ted talk. In it, she talks about a woman whose husband, a soldier, comes back from Afghanistan and they struggle to reconnect – “So she tucks love letters throughout the house as a way to say: ‘Come back to me. Find me when you can'” – and a university student who slips letters around her campus, only to suddenly find everyone is writing them and there are love letters hanging from the trees.

Now there are more than 10,000 people who join in all over the world. Sometimes, they write letters to order, to people who are lonely and down and just want someone to tell them that everything will be OK. Mostly, though, they scribble notes and leave them somewhere unlikely, for somebody to find.

It’s a very cute idea. It also sounds, well, a bit American touchy-feely. I’m not sure that’s something us Brits do well (although this chap from Aberdeen did it for a while, to some success judging by the feedback on his blog. Even if his notes were printouts and not charmingly done by hand). But I know that if I was on the receiving end of a letter like that, it almost certainly might put a smile on my face. So I decide to give it a try and see if I might do the same for someone else.