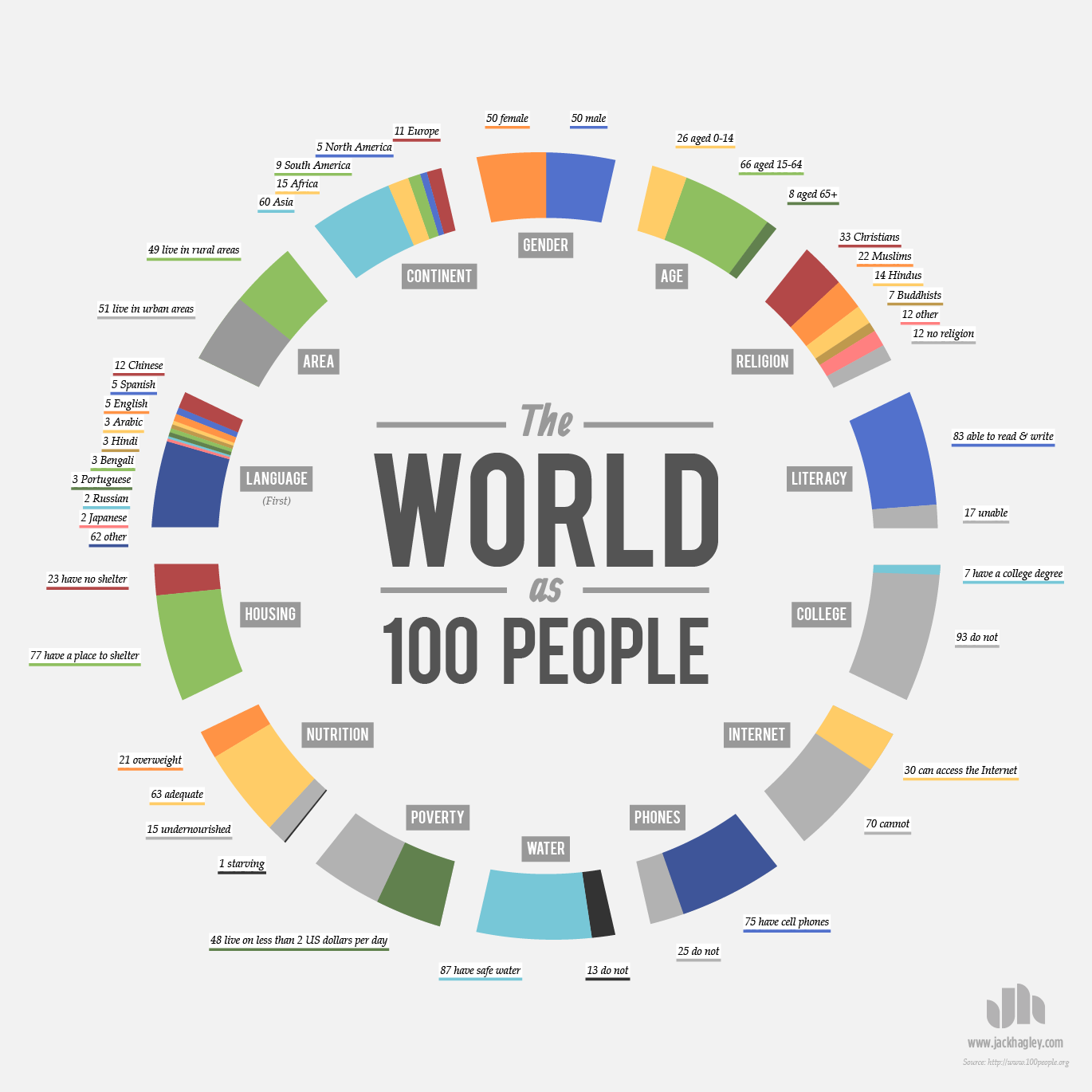 Take today’s world and shrink its population down to just 100 people. Then apply a range of global measures to this group. Voila! You get a fascinating view of humanity at a scale that your brain can comprehend. For instance, from the total of a 100 people: 48 live on less than $2 per day, 93 do not have a college degree, 16 are undernourished or starving, 23 have no shelter, and 17 are illiterate.

The infographic was designed by graphic designer Jack Hagley. You can check out the infographic and read more of Hagley’s work here.

Ever wonder how many people have gone before? The succinct infographic courtesy of Jon Gosier takes a good stab at answering the question. First, a few assumptions and explanations:

The numbers in this piece are speculative but are as accurate as modern research allows. It’s widely accepted that prior to 2002 there had been somewhere between 106 and 140 billion homo sapiens born to the world. The graphic below uses the conservative number (106 bn) as the basis for a circle graph. The center dot represents how many people are currently living (red) versus the dead (white). The dashed vertical line shows how much time passed between milestones. The spectral graph immediately below this text illustrates the population ‘benchmarks’ that were used to estimate the population over time. Adding the population numbers gets you to 106 billion. The red sphere is then used to compare against other data. Twenty-five years ago, almost no one had a cell phone. Very few of us had digital cameras, and laptop computers belonged only to the very rich. But there is something else—not electronic, but also man-made—that has climbed from the margins of the culture in the 1980s to become a standard accoutrement in upscale neighborhoods across the land: twins.

According to the latest data from the Centers for Disease Control and Prevention the U.S. twin rate has skyrocketed from one pair born out of every 53 live births in 1980 to one out of every 31 births in 2008. Where are all these double-babies coming from? And what’s going to happen in years to come—will the multiple-birth rate continue to grow until America ends up a nation of twins?

The twin boom can be explained by changes in when and how women are getting pregnant. Demographers have in recent years described a “delayer boom,” in which birth rates have risen among the sort of women—college-educated—who tend to put off starting a family into their mid-30s or beyond. There are now more in this group than ever before: In 1980, just 12.8 percent of women had attained a bachelor’s degree or higher; by 2010, that number had almost tripled, to 37 percent. And women in their mid-30s have multiple births at a higher rate than younger women. A mother who is 35, for example, is four times more likely than a mother who is 20 to give birth to twins. That seems to be on account of her producing more follicle-stimulating hormone, or FSH, which boosts ovulation. The more FSH you have in your bloodstream, the greater your chances of producing more than one egg in each cycle, and having fraternal twins as a result.