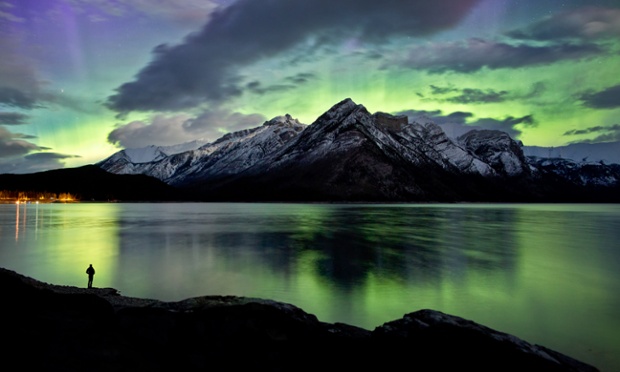 Not every selfie has to be about me or you, the smartphone-carrier. Sometimes a selfie can focus on something else, something bigger than ourselves. Sometimes the self in the selfie becomes just a meaningless dot on a broader, deeper, richer landscape. We need to see more selfies like those of Canadian photographer Paul Zizka — his are indeed selfies worth sharing and celebrating.

The majority of us can identify with the awkward and self-conscious years of adolescence. And, interestingly enough many of us emerge to the other side.

Photographer Merilee Allred tries to show us that teenage insecurities don’t have to hold us back as an adult in her project ‘Awkward Years’. Bullied as a child, the 35-year-old embarked on the project after a friend didn’t believe Merilee was a self-described ‘queen of the nerds’ as a child. She asked people to pose with unflattering pictures of themselves when they were young to highlight how things can turn out alright.

Check out more pictures from the awkward years here.

In recent years narcissism has been taking a bad rap. So much so that Narcissistic Personality Disorder (NPD) was slated for removal from the 2013 edition of the Diagnostic and Statistical Manual of Mental Disorders – DSM-V. The DSM-V is the professional reference guide published by the American Psychiatric Association (APA). Psychiatrists and clinical psychologists had decided that they needed only 5 fundamental types of personality disorder: anti-social, avoidant, borderline, obsessive-compulsive and schizotypal. Hence no need for NPD.

Interestingly in mid-2010, the APA reversed itself by saving narcissism from the personality disorders chopping block. While this may be a win for narcissists by having their “condition” back in the official catalog, some suggest this is a huge mistake. After all narcissism now seems to have become a culturally fashionable, de rigeur activity rather than a full-blown pathological disorder.

… You don’t need to be a psychiatrist to see that narcissism has shifted from a pathological condition to a norm, if not a means of survival.

Narcissism appears as a necessity in a society of the spectacle, which runs from Andy Warhol’s “15 minutes of fame” prediction through reality television and self-promotion to YouTube hits.

While the media and social media had a role in normalising narcissism, photography has played along. We exist in and for society, only once we have been photographed. The photographic portrait is no longer linked to milestones like graduation ceremonies and weddings, or exceptional moments such as vacations, parties or even crimes. It has become part of a daily, if not minute-by-minute, staging of the self. Portraits appear to have been eclipsed by self-portraits: Tweeted, posted, shared.

According to Greek mythology, Narcissus was the man who fell in love with his reflection in a pool of water. According to the DSM-IV, 50-70 per cent of those diagnosed with NPD are men. But according to my Canadian upbringing looking at one’s reflection in a mirror for too long was a weakness particular to the fairer sex and an anti-social taboo.

I recall doubting Cindy Sherman’s Untitled Film Stills (1977-80): wasn’t she just a narcissist taking pictures of herself all day long? At least she was modest enough to use a remote shutter trigger. Digital narcissism has recently gained attention with Gabriela Herman’s portrait series Bloggers (2010-11), which captures bloggers gazing into their glowing screens. Even closer to our narcissistic norm are Wolfram Hahn’s portraits of people taking pictures of themselves (Into the Light, 2009-10).