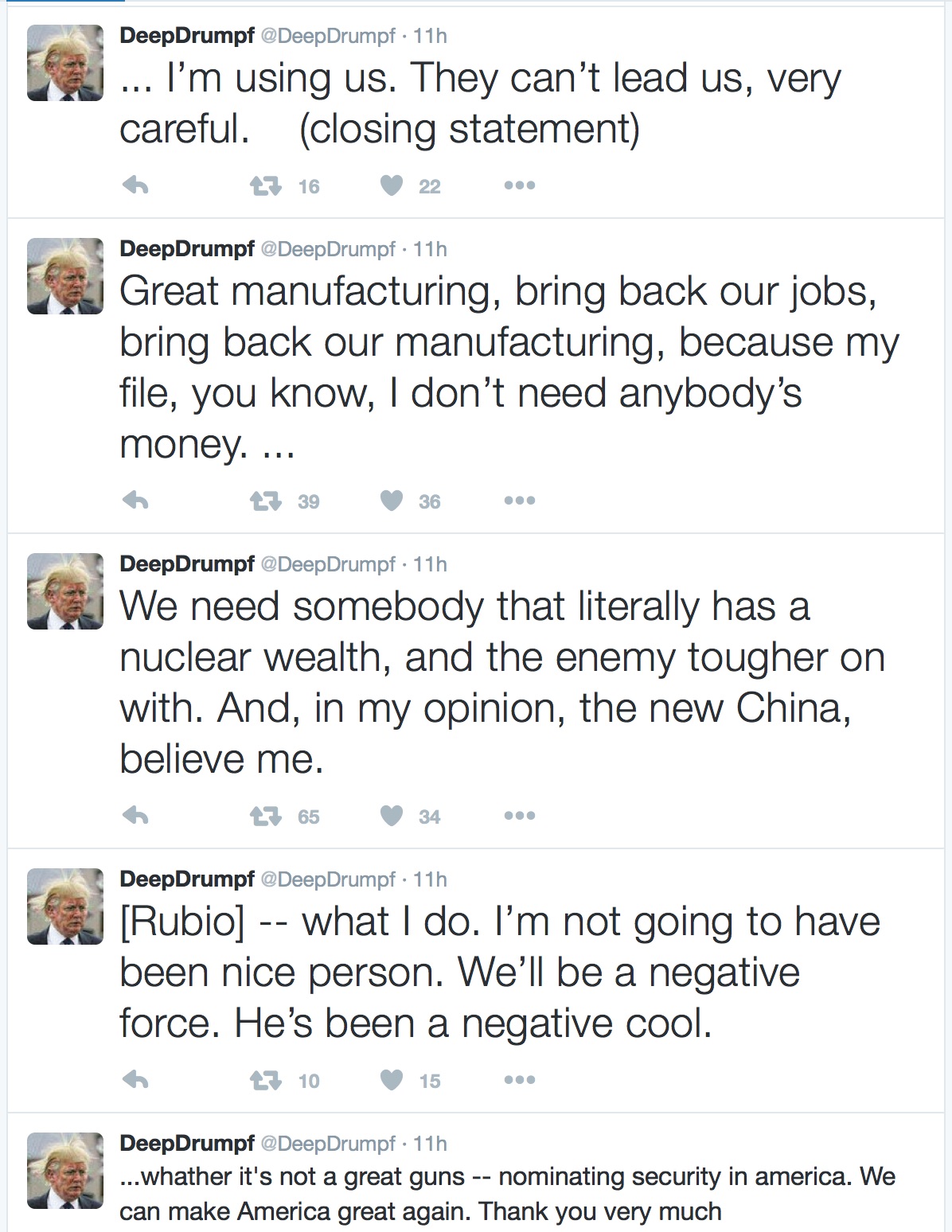 Florida Man (@_FloridaMan) finally brings it all into sharp and hysterical focus. Now, I may have a worthy reason for joining the Twitterscape and actually following someone.

Dangling into the sea like America’s last-ditch lifeline, the state of Florida beckons. Hustlers and fugitives, million-dollar hucksters and harebrained thieves, Armani-wearing drug traffickers and hapless dope dealers all congregate, scheme and revel in the Sunshine State. It’s easy to get in, get out or get lost.

For decades, this cast of characters provided a diffuse, luckless counternarrative to the salt-and-sun-kissed Florida that tourists spy from their beach towels. But recently there arrived a digital-era prototype, @_FloridaMan, a composite of Florida’s nuttiness unspooled, tweet by tweet, to the world at large. With pithy headlines and links to real news stories, @_FloridaMan offers up the “real-life stories of the world’s worst super hero,” as his Twitter bio proclaims.

His more than 1,600 tweets — equal parts ode and derision — are a favorite for weird-news aficionados. Yet, two years since his 2013 debut, the man behind the Twitter feed remains beguilingly anonymous, a Wizard of LOLZ. (The one false note is his zombielike avatar: The mug shot belongs to an Indiana Man.)

His style is deceptively simple. Nearly every Twitter message begins “Florida Man.” What follows, though, is almost always a pile of trouble. Some examples:

Florida Man Tries to Walk Out of Store With Chainsaw Stuffed Down His Pants.

Florida Man Falls Asleep During Sailboat Burglary With Gift Bag on His Head; Can’t Be Woken by Police.

Florida Man Says He Only Survived Ax Attack By Drunk Stripper Because “Her Coordination Was Terrible.”

“Now I think there are people who actually aspire to Florida Man-ness,” said Dave Barry, who celebrates Florida’s brand of madness in his popular columns and best-selling books. “It’s like the big leagues. It’s the Broadway for idiots.”

Florida Man is considerably more popular (and funny) than competitors like Texas Man (732 followers) or California Man (129). But is the Florida Man who Accidentally Shoots Himself With Stun Gun While Trying to Rob the Radio Shack He Also Works At truly more wacky than, let’s say, an Arkansas Man or New Jersey Man?

Another sign that some humans are devoid of common sense comes courtesy of New York. The state is designating around 100 traffic rest stops as “Text Stops”. So, drivers — anxious to get in a spontaneous email fix or tweet while behind the wheel — can now text to their thumbb’s content without imperiling the lives of others or themselves.

Perhaps this signals the demise of the scenic rest stop, only to be replaced by zones where drivers can update their digital status and tweet about reality without actually experiencing it. This is also a sign that evolution is being circumvented by artificially protecting those who lack common sense.

Yesterday, New York Governor Andrew Cuomo announced a new initiative to stop drivers from texting on the road—turn rest areas into “Text Stops” and put up signage that lets people know how many miles they’ll have to hold off on tweeting that witty tweet.

91 rest stops, Park-n-Ride facilities, and parking areas along the New York State Thruway and State Highways will now become special texting zones for motorists who may not have noticed the wayside spots before. WBNG (a local news site) lists the locations of all 91 Text Stops.

“We are always looking at new and better ways to make the highway even safer,” Thruway Authority Executive Director Thomas J. Madison said yesterday, according to WBNG. “Governor Cuomo’s Text Stops initiative is an excellent way for drivers to stay in touch while recognizing the dangers of using mobile devices while driving.”

In total, 289 new signs will alert motorists of the new texting zone locations. The signs advertising the re-purposed zones will be bright blue and will feature messages like “It Can Wait” and the number of miles until the next opportunity to pull over. The state is cracking down on texting in terms of fines as well—the penalty for texting and driving recently increased to $150 and five points on your license, according to BetaBeat. WBNG also notes that in the summer of 2013, New York saw a 365 percent increase in tickets issued for distracted driving.

Read the entire article here, but don’t re-tweet it while driving.

Correlate 2 sets of totally independent statistics and you get to blame Twitter for most, if not all, of the world’s ills. That’s what Tim Cooley has done with this funny and informative #Blame Twitter infographic below.

Of course, even though the numbers are all verified and trusted, causation is entirely another factor. So, while 144,595 people die each day (on average), it is not (yet) as a result of using Twitter, and while our planet loses 1 hectare of forest for every 18,000 tweets, it’s not the endless Twittering that is causing de-forestation.

Five years in internet time is analogous to several entire human lifespans. So, it’s no surprise that Twitter seems to have been with us forever. Despite the near ubiquity of the little blue bird, most of the service’s tweeters have no idea why they are constrained to using a mere 140 characters to express themselves.

Farhad Manjoo over at Slate has a well-reasoned plea to increase this upper character limit for the more garrulous amongst us.

Though perhaps more importantly is the effect of this truncated form of messaging on our broader mechanisms of expression and communication. Time will tell if our patterns of speech and the written word will adjust accordingly.

Five years ago this month, Twitter opened itself up to the public. The new service, initially called Twttr, was born out of software engineer Jack Dorsey’s fascination with an overlooked corner of the modern metropolis—the central dispatch systems that track delivery trucks, taxis, emergency vehicles, and bike messengers as they’re moving about town. As Dorsey once told the Los Angeles Times, the logs of central dispatchers contained “this very rich sense of what’s happening right now in the city.” For a long time, Dorsey tried to build a public version of that log. It was only around 2005, when text messaging began to take off in America, that his dream became technically feasible. There was only one problem with building Twittr on mobile carriers’ SMS system, though—texts were limited to 160 characters, and if you included space for a user’s handle, that left only 140 characters per message.

What could you say in 140 characters? Not a whole lot—and that was the point. Dorsey believed that Twitter would be used for status updates—his prototypical tweets were “in bed” and “going to park,” and his first real tweet was “inviting coworkers.” That’s not how we use Twitter nowadays. In 2009, the company acknowledged that its service had “outgrown the concept of personal status updates,” and it changed its home-screen prompt from “What are you doing?” to the more open-ended “What’s happening?”

As far as I can tell, though, Twitter has never considered removing the 140-character limit, and Twitter’s embrace of this constraint has been held up as one of the key reasons for the service’s success. But I’m hoping Twitter celebrates its fifth birthday by rethinking this stubborn stance. The 140-character limit now feels less like a feature than a big, obvious bug. I don’t want Twitter to allow messages of unlimited length, as that would encourage people to drone on interminably. But since very few Twitter users now access the system through SMS, it’s technically possible for the network to accommodate longer tweets. I suggest doubling the ceiling—give me 280 characters, Jack, and I’ll give you the best tweets you’ve ever seen!