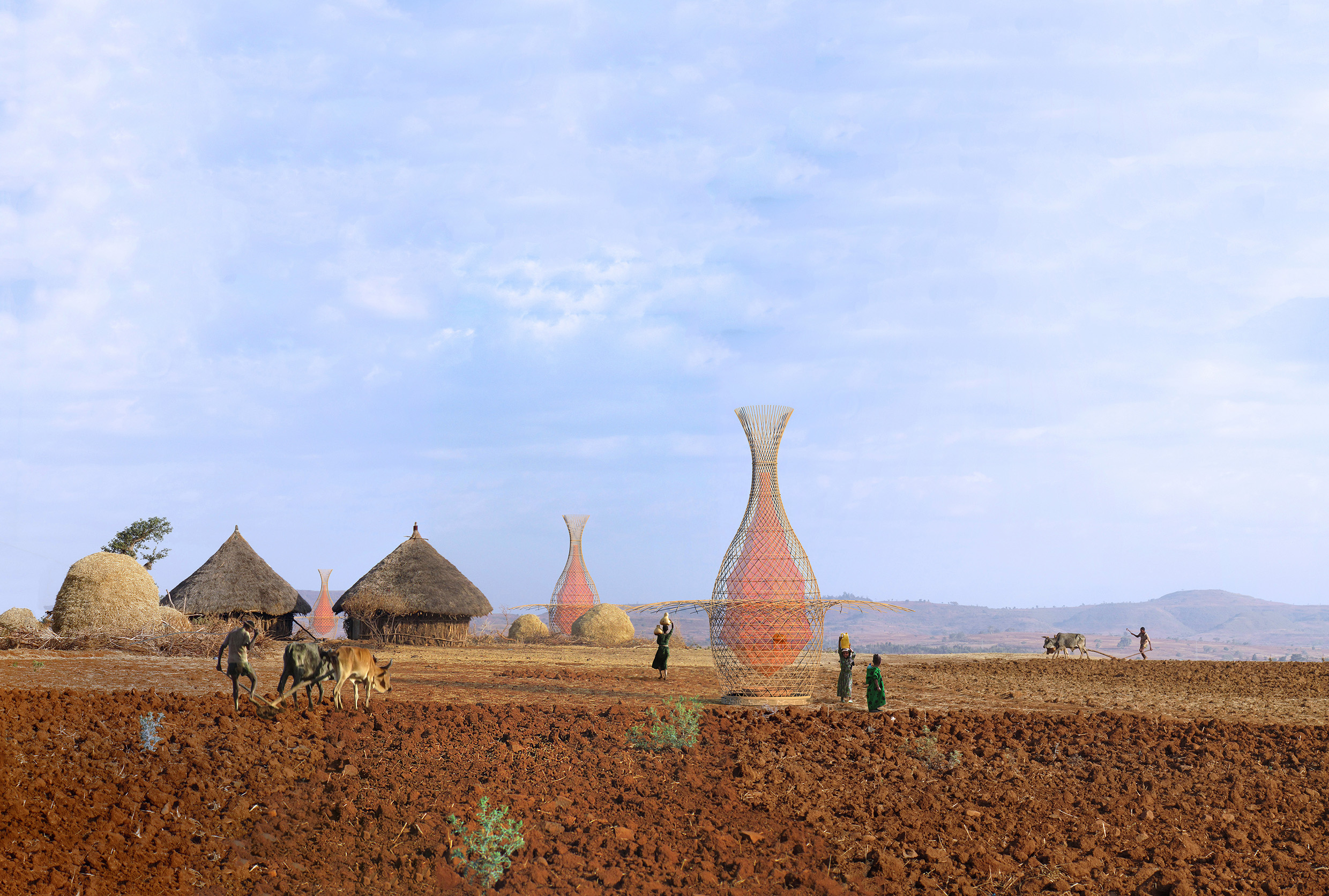 Ideas and innovations that solve a particular human hardship are worthy of reward and recognition. When the idea is also ingenious and simple it should be celebrated. Take the invention of industrial designers Arturo Vittori and Andreas Vogler. Fashioned from plant stalks and nylon mess their 30 foot tall WarkaWater Towers soak up moisture from the air for later collection — often up to 25 gallons of drinking water today. When almost a quarter of the world’s population has poor access to daily potable water this remarkable invention serves a genuine need.

In some parts of Ethiopia, finding potable water is a six-hour journey.

People in the region spend 40 billion hours a year trying to find and collect water, says a group called the Water Project. And even when they find it, the water is often not safe, collected from ponds or lakes teeming with infectious bacteria, contaminated with animal waste or other harmful substances.

The water scarcity issue—which affects nearly 1 billion people in Africa alone—has drawn the attention of big-name philanthropists like actor and Water.org co-founder Matt Damon and Microsoft co-founder Bill Gates, who, through their respective nonprofits, have poured millions of dollars into research and solutions, coming up with things like a system that converts toilet water to drinking water and a “Re-invent the Toilet Challenge,” among others.

Critics, however, have their doubts about integrating such complex technologies in remote villages that don’t even have access to a local repairman. Costs and maintenance could render many of these ideas impractical.

“If the many failed development projects of the past 60 years have taught us anything,” wrote one critic, Toilets for People founder Jason Kasshe, in a New York Times editorial, “it’s that complicated, imported solutions do not work.”

Other low-tech inventions, like this life straw, aren’t as complicated, but still rely on users to find a water source.

It was this dilemma—supplying drinking water in a way that’s both practical and convenient—that served as the impetus for a new product called Warka Water, an inexpensive, easily-assembled structure that extracts gallons of fresh water from the air.

The invention from Arturo Vittori, an industrial designer, and his colleague Andreas Vogler doesn’t involve complicated gadgetry or feats of engineering, but instead relies on basic elements like shape and material and the ways in which they work together.

At first glance, the 30-foot-tall, vase-shaped towers, named after a fig tree native to Ethiopia, have the look and feel of a showy art installation. But every detail, from carefully-placed curves to unique materials, has a functional purpose.

The rigid outer housing of each tower is comprised of lightweight and elastic juncus stalks, woven in a pattern that offers stability in the face of strong wind gusts while still allowing air to flow through. A mesh net made of nylon or  polypropylene, which calls to mind a large Chinese lantern, hangs inside, collecting droplets of dew that form along the surface. As cold air condenses, the droplets roll down into a container at the bottom of the tower. The water in the container then passes through a tube that functions as a faucet, carrying the water to those waiting on the ground.

Using mesh to facilitate clean drinking water isn’t an entirely new concept. A few years back, an MIT student designed a fog-harvesting device with the material. But Vittori’s invention yields more water, at a lower cost, than some other concepts that came before it.

“[In Ethiopia], public infrastructures do not exist and building [something like] a well is not easy,” Vittori says of the country. “To find water, you need to drill in the ground very deep, often as much as 1,600 feet.  So it’s technically difficult and expensive. Moreover, pumps need electricity to run as well as access to spare parts in case the pump breaks down.”

So how would Warka Water’s low-tech design hold up in remote sub-Saharan villages? Internal field tests have shown that one Warka Water tower can supply more than 25 gallons of water throughout the course of a day, Vittori claims. He says because the most important factor in collecting condensation is the difference in temperature between nightfall and daybreak, the towers are proving successful even in the desert, where temperatures, in that time, can differ as much as 50 degrees Fahrenheit.

The structures, made from biodegradable materials, are easy to clean and can be erected without mechanical tools in less than a week. Plus, he says, “once locals have the necessary know-how, they will be able to teach other villages and communities to build the Warka.”

In all, it costs about $500 to set up a tower—less than a quarter of the cost of something like the Gates toilet, which costs about $2,200 to install and more to maintain. If the tower is mass produced, the price would be even lower, Vittori says. His team hopes to install two Warka Towers in Ethiopia by next year and is currently searching for investors who may be interested in scaling the water harvesting technology across the region.