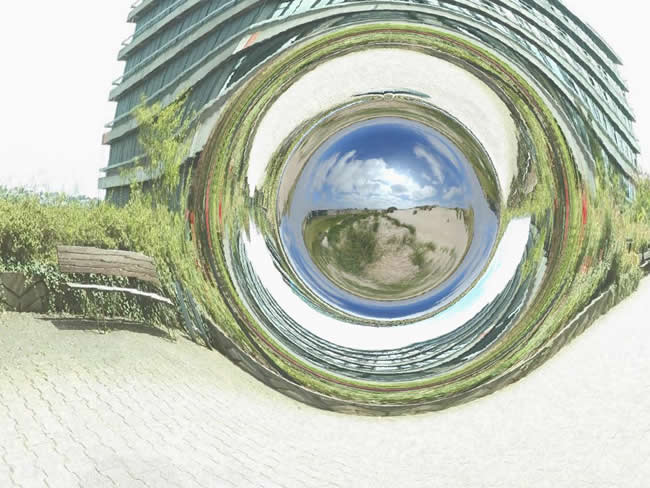 Intergalactic travel just became a lot easier, well, if only theoretically at the moment.

IT IS not every day that a piece of science fiction takes a step closer to nuts-and-bolts reality. But that is what seems to be happening to wormholes. Enter one of these tunnels through space-time, and a few short steps later you may emerge near Pluto or even in the Andromeda galaxy millions of light years away.

You probably won’t be surprised to learn that no one has yet come close to constructing such a wormhole. One reason is that they are notoriously unstable. Even on paper, they have a tendency to snap shut in the blink of an eye unless they are propped open by an exotic form of matter with negative energy, whose existence is itself in doubt.

Now, all that has changed. A team of physicists from Germany and Greece has shown that building wormholes may be possible without any input from negative energy at all. “You don’t even need normal matter with positive energy,” says Burkhard Kleihaus of the University of Oldenburg in Germany. “Wormholes can be propped open with nothing.”

The findings raise the tantalising possibility that we might finally be able to detect a wormhole in space. Civilisations far more advanced than ours may already be shuttling back and forth through a galactic-wide subway system constructed from wormholes. And eventually we might even be able to use them ourselves as portals to other universes.

Wormholes first emerged in Einstein’s general theory of relativity, which famously shows that gravity is nothing more than the hidden warping of space-time by energy, usually the mass-energy of stars and galaxies. Soon after Einstein published his equations in 1916, Austrian physicist Ludwig Flamm discovered that they also predicted conduits through space and time.

But it was Einstein himself who made detailed investigations of wormholes with Nathan Rosen. In 1935, they concocted one consisting of two black holes, connected by a tunnel through space-time. Travelling through their wormhole was only possible if the black holes at either end were of a special kind. A conventional black hole has such a powerful gravitational field that material sucked in can never escape once it has crossed what is called the event horizon. The black holes at the end of an Einstein-Rosen wormhole would be unencumbered by such points of no return.

Einstein and Rosen’s wormholes seemed a mere curiosity for another reason: their destination was inconceivable. The only connection the wormholes offered from our universe was to a region of space in a parallel universe, perhaps with its own stars, galaxies and planets. While today’s theorists are comfortable with the idea of our universe being just one of many, in Einstein and Rosen’s day such a multiverse was unthinkable.

Fortunately, it turned out that general relativity permitted the existence of another type of wormhole. In 1955, American physicist John Wheeler showed that it was possible to connect two regions of space in our universe, which would be far more useful for fast intergalactic travel. He coined the catchy name wormhole to add to black holes, which he can also take credit for.

The trouble is the wormholes of Wheeler and Einstein and Rosen all have the same flaw. They are unstable. Send even a single photon of light zooming through and it instantly triggers the formation of an event horizon, which effectively snaps shut the wormhole.

Bizarrely, it is the American planetary astronomer Carl Sagan who is credited with moving the field on. In his science fiction novel, Contact, he needed a quick and scientifically sound method of galactic transport for his heroine – played by Jodie Foster in the movie. Sagan asked theorist Kip Thorne at the California Institute of Technology in Pasadena for help, and Thorne realised a wormhole would do the trick. In 1987, he and his graduate students Michael Morris and Uri Yertsever worked out the recipe to create a traversable wormhole. It turned out that the mouths could be kept open by hypothetical material possessing a negative energy. Given enough negative energy, such a material has a repulsive form of gravity, which physically pushes open the wormhole mouth.

Negative energy is not such a ridiculous idea. Imagine two parallel metal plates sitting in a vacuum. If you place them close together the vacuum between them has negative energy – that is, less energy than the vacuum outside. This is because a normal vacuum is like a roiling sea of waves, and the waves that are too big to fit between the plates are naturally excluded. This leaves less energy inside the plates than outside.

Unfortunately, this kind of negative energy exists in quantities far too feeble to prop open a wormhole mouth. Not only that but a Thorne-Morris-Yertsever wormhole that is big enough for someone to crawl through requires a tremendous amount of energy – equivalent to the energy pumped out in a year by an appreciable fraction of the stars in the galaxy.

Back to the drawing board then? Not quite. There may be a way to bypass those difficulties. All the wormholes envisioned until recently assume that Einstein’s theory of gravity is correct. In fact, this is unlikely to be the case. For a start, the theory breaks down at the heart of a black hole, as well as at the beginning of time in the big bang. Also, quantum theory, which describes the microscopic world of atoms, is incompatible with general relativity. Since quantum theory is supremely successful – explaining everything from why the ground is solid to how the sun shines – many researchers believe that Einstein’s theory of gravity must be an approximation of a deeper theory.

[div class=attrib]Image of a traversable wormhole which connects the place in front of the physical institutes of Tübingen University with the sand dunes near Boulogne sur Mer in the north of France. Courtesy of Wikipedia.[end-div]