Another day, another particle, courtesy of scientists at Fermilab. The CDF group working with data from Fermilab’s Tevatron particle collider announced the finding of a new, neutron-like particle last week. The particle known as a neutral Xi-sub-b is a heavy relative of the neutron and is made up of a strange quark, an up quark and a bottom quark, hence the “s-u-b” moniker. While its existence was predicted by the Standard Model, the observation of the neutral Xi-sub-b is significant because it strengthens our understanding of how quarks form matter. Fermilab physicist Pat Lukens, a member of the CDF collaboration, presented the discovery at Fermilab on Wednesday, July 20.

The neutral Xi-sub-b is the latest entry in the periodic table of baryons. Baryons are particles formed of three quarks, the most common examples being the proton (two up quarks and a down quark) and the neutron (two down quarks and an up quark). The neutral Xi-sub-b belongs to the family of bottom baryons, which are about six times heavier than the proton and neutron because they all contain a heavy bottom quark. The particles are produced only in high-energy collisions, and are rare and very difficult to observe.

Although Fermilab’s Tevatron particle collider is not a dedicated bottom quark factory, sophisticated particle detectors and trillions of proton-antiproton collisions have made it a haven for discovering and studying almost all of the known bottom baryons. Experiments at the Tevatron discovered the Sigma-sub-b baryons (?b and ?b*) in 2006, observed the Xi-b-minus baryon (?b–) in 2007, and found the Omega-sub-b (?b–) in 2009.

Two exciting races tracked through Grenoble, France this passed week. First, the Tour de France held one of the definitive stages of the 2011 race in Grenoble, the individual time trial. Second, Grenoble hosted the European Physical Society conference on High-Energy Physics. Fans of professional cycling and high energy physics would not be disappointed.

In cycling, Cadel Evans set a blistering pace in his solo effort on stage 20 to ensure the Yellow Jersey and an overall win in this year’s Tour.

In the world of high energy physics, physicists from Fermilab and CERN presented updates on their competing searches to discover (or not) the Higgs boson. The two main experiments at Fermilab, CDF and DZero, are looking for traces of the Higgs particle in the debris of Tevatron collider’s proton-antiproton collisions. At CERN’s Large Hadron Collider scientists working at the two massive detectors, Atlas and CMS, are sifting through vast mountains of data accumulated from proton-proton collisions. 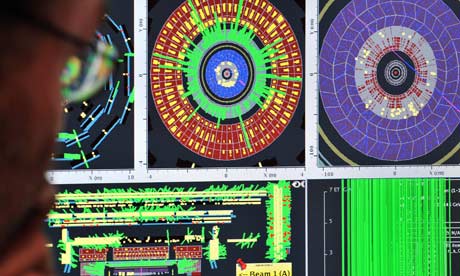 Both colliders have been smashing particles together in their ongoing quest to refine our understanding of the building blocks of matter, and to determine the existence of the Higgs particle. The Higgs is believed to convey mass to other particles, and remains one of the remaining undiscovered components of the Standard Model of physics.

The latest results presented in Grenoble show excess particle events, above a chance distribution, across the search range where the Higgs particle is predicted to be found. There is a surplus of unusual events at a mass of 140-145 GeV (gigaelectronvolts), which is at the low end of the range allowed for the particle. Tantalizingly, physicists’ theories predict that this is the most likely region where the Higgs is to be found.

Physicists could be on their way to discovering the Higgs boson, if it exists, by next year. Scientists in two experiments at the Large Hadron Collider pleasantly surprised attendees at the European Physical Society conference this afternoon by both showing small hints of what could be the prized particle in the same area.

“This is what we expect to find on the road to the Higgs,” said Gigi Rolandi, physics coordinator for the CMS experiment.

Both experiments found excesses in the 130-150 GeV mass region. But the excesses did not have enough statistical significance to count as evidence of the Higgs.

If the Higgs really is lurking in this region, it is still in reach of experiments at Fermilab’s Tevatron. Although the accelerator will shut down for good at the end of September, Fermilab’s CDF and DZero experiments will continue to collect data up until that point and to improve their analyses.

“This should give us the sensitivity to make a new statement about the 114-180 mass range,” said Rob Roser, CDF spokesperson. Read more about the differences between Higgs searches at the Tevatron and at the LHC here.

The CDF and DZero experiments announced expanded exclusions in the search for their specialty, the low-mass Higgs, this morning. On Wednesday, the two experiments will announce their combined Higgs results.

Scientists measure statistical significance in units called sigma, written as the Greek letter ?. These high-energy experiments usually require 3?  level of confidence, about 99.7 percent certainty, to claim they’ve seen evidence of something. They need 5? to claim a discovery. The ATLAS experiment reported excesses at confidence levels between 2 and 2.8?, and the CMS experiment found similar excesses at close to 3?.

After the two experiments combine their results — a mathematical process much more arduous than simple addition — they could find themselves on new ground. They hope to do this in the next few months, at the latest by the winter conferences, said Kyle Cranmer, an assistant professor at New York University who presented the results for the ATLAS collaboration.

“The fact that these two experiments with different issues, different approaches and different modeling found similar results leads you to believe it might not be just a fluke,” Cranmer said. “This is what it would look like if it were real.”

About a year ago, the DZero collaboration at Fermilab published  a tantalizing result in which the universe unexpectedly showed a preference for matter over antimatter. Now the collaboration has more data, and the evidence for this effect has grown stronger.

The result is extremely exciting: The question of why our universe should exist solely of matter is one of the burning scientific questions of our time. Theory predicts that matter and antimatter was made in equal quantities. If something hadn’t slightly favored matter over antimatter, our universe would consist of a bath of photons and little else. Matter wouldn’t exist.

The Standard Model predicts a value near zero for one of the parameters that is associated with the difference between the production of muons and antimuons in B meson decays. The DZero results from 2010 and 2011 differ from zero and are consistent with each other. The vertical bars of the measurements indicate their uncertainty.

The 2010 measurement looked at muons and antimuons emerging from the decays of neutral mesons containing bottom quarks, which is a source that scientists have long expected to be a fruitful place to study the behavior of matter and antimatter under high-energy conditions. DZero scientists found a 1 percent difference between the production of pairs of muons and pairs of antimuons in B meson decays at Fermilab’s Tevatron collider. Like all measurements, that measurement had an uncertainty associated with it. Specifically, there was about a 0.07 percent chance that the measurement could come from a random fluctuation of the data recorded. That’s a tiny probability, but since DZero makes thousands of measurements, scientists expect to see the occasional rare fluctuation that turns out to be nothing.

During the last year, the DZero collaboration has taken more data and refined its analysis techniques. In addition, other scientists have raised questions and requested additional cross-checks. One concern was whether the muons and antimuons are actually coming from the decay of B mesons, rather than some other source.

Now, after incorporating almost 50 percent more data and dozens of cross-checks, DZero scientists are even more confident in the strength of their result. The probability that the observed effect is from a random fluctuation has dropped quite a bit and now is only 0.005 percent. DZero scientists will present the details of their analysis in a seminar geared toward particle physicists later today.

The new result suggests that DZero is hot on the trail of a crucial clue in one of the defining questions of all time: Why are we here at all?