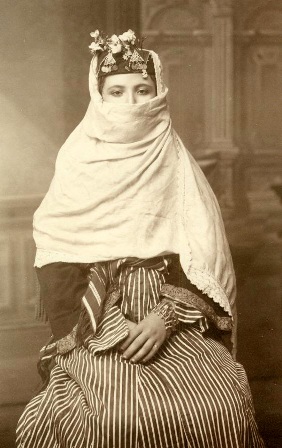 A fascinating essay by Haleh Anvari, Iranian writer and artist, provides an insightful view of the role that fashion takes in shaping many of our perceptions — some right, many wrong — of women.

Quite rightly she argues that the measures our culture places on women, through the lens of Western fashion or Muslim tradition, are misleading. In both cases, there remains a fundamental need to address and to continue to address women’s rights versus those of men. Fashion stereotypes may be vastly different across continents, but the underlying issues remain very much the same whether a woman wears a hijab on the street or lingerie on a catwalk.

I took a series of photographs of myself in 2007 that show me sitting on the toilet, weighing myself, and shaving my legs in the bath. I shot them as an angry response to an encounter with a gallery owner in London’s artsy Brick Lane. I had offered him photos of colorful chadors — an attempt to question the black chador as the icon of Iran by showing the world that Iranian women were more than this piece of black cloth. The gallery owner wasn’t impressed. “Do you have any photos of Iranian women in their private moments?” he asked.

As an Iranian with a reinforced sense of the private-public divide we navigate daily in our country, I found his curiosity offensive. So I shot my “Private Moments” in a sardonic spirit, to show that Iranian women are like all women around the world if you get past the visual hurdle of the hijab. But I never shared those, not just because I would never get a permit to show them publicly in Iran, but also because I am prepared to go only so far to prove a point. Call me old-fashioned.Read the entire article here.

Ever since the hijab, a generic term for every Islamic modesty covering, became mandatory after the 1979 revolution, Iranian women have been used to represent the country visually. For the new Islamic republic, the all-covering cloak called a chador became a badge of honor, a trademark of fundamental change. To Western visitors, it dropped a pin on their travel maps, where the bodies of Iranian women became a stand-in for the character of Iranian society. When I worked with foreign journalists for six years, I helped produce reports that were illustrated invariably with a woman in a black chador. I once asked a photojournalist why. He said, “How else can we show where we are?”

How wonderful. We had become Iran’s Eiffel Tower or Big Ben.

Next came the manteau-and-head scarf combo — less traditional, and more relaxed, but keeping the lens on the women. Serious reports about elections used a “hair poking out of scarf” standard as an exit poll, or images of scarf-clad women lounging in coffee shops, to register change. One London newspaper illustrated a report on the rise of gasoline prices with a woman in a head scarf, photographed in a gas station, holding a pump nozzle with gasoline suggestively dripping from its tip. A visitor from Mars or a senior editor from New York might have been forgiven for imagining Iran as a strange land devoid of men, where fundamentalist chador-clad harridans vie for space with heathen babes guzzling cappuccinos. (Incidentally, women hardly ever step out of the car to pump gas here; attendants do it for us.)

The disputed 2009 elections, followed by demonstrations and a violent backlash, brought a brief respite. The foreign press was ejected, leaving the reporting to citizen journalists not bound by the West’s conventions. They depicted a politically mature citizenry, male and female, demanding civic acknowledgment together.

We are now witnessing another shift in Iran’s image. It shows Iran “unveiled” — a tired euphemism now being used to literally undress Iranian women or show them off as clotheshorses. An Iranian fashion designer in Paris receives more plaudits in the Western media for his blog’s street snapshots of stylish, affluent young women in North Tehran than he gets for his own designs. In this very publication, a male Iranian photographer depicted Iranian women through flimsy fabrics under the title “Veiled Truths”; one is shown in a one-piece pink swimsuit so minimal it could pass for underwear; others are made more sensual behind sheer “veils,” reinforcing a sense of peeking at them. Search the Internet and you can get an eyeful of nubile limbs in opposition to the country’s official image, shot by Iranian photographers of both sexes, keen to show the hidden, supposedly true, other side of Iran.

Young Iranians rightly desire to show the world the unseen sides of their lives. But their need to show themselves as like their peers in the West takes them into dangerous territory. Professional photographers and artists, encouraged by Western curators and seeking fast-track careers, are creating a new wave of homegrown neo-Orientalism. A favorite reworking of an old cliché is the thin, beautiful young woman reclining while smoking a hookah, dancing, or otherwise at leisure in her private spaces. Ingres could sue for plagiarism.

In a country where the word feminism is pejorative, there is no inkling that the values of both fundamentalism and Western consumerism are two sides of the same coin — the female body as an icon defining Iranian culture.

It is true that we Iranians live dual lives, and so it is true that to see us in focus, you must enter our inner sanctum. But the inner sanctum includes women who believe in the hijab, fat women, old women and, most important, women in professions from doctor to shopkeeper. It also includes men, not all of whom are below 30 years of age. If you wish to see Iran as it is, you need go no further than Facebook and Instagram. Here, Iran is neither fully veiled nor longing to undress itself. Its complex variety is shown through the lens of its own people, in both private and public spaces.