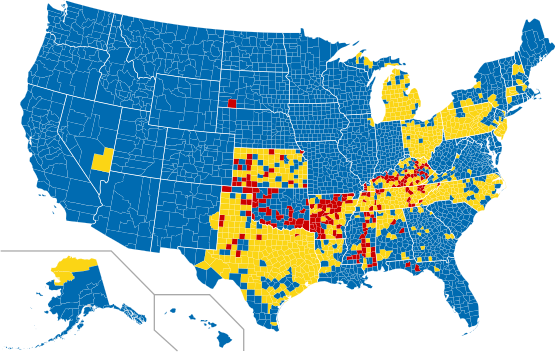 Apparently, Prohibition (of alcohol sales, production and transportation) ended in the United States in 1933. But, you’d be surprised to learn that more than 80 years later many regions across the nation still have restrictions and bans.

The map shows areas where alcohol is restricted: red indicates that the sales of alcohol is banned (dry); blue shows that it is allowed (wet); and yellow denotes that the county is “partially dry” or “moist”.

Interestingly, Kansas, Tennessee and Mississippi are dry states by default and require individual counties to opt in to sell alcohol. Texas is a confusing patchwork: of Texas’s 254 counties, 11 are completely dry, 194 are partially dry, and 49 are entirely wet. And, to to add to the confusion, Texas prohibits off-premises sale of liquor — but not beer and wine — all day on Sunday and select holidays.

The US Federal Communications Commission (FCC) took a giant step in the right direction, on February 26, 2015, when it voted to regulate internet broadband much like a public utility. This is a great victory for net neutrality advocates and consumers who had long sought to protect equal access for all to online services and information. Tim Berners Lee, inventor of the World Wide Web, offered his support and praise for the ruling, saying:

Internet activists scored a landmark victory on Thursday as the top US telecommunications regulator approved a plan to govern broadband internet like a public utility.

Following one of the most intense – and bizarre – lobbying battles in the history of modern Washington politics, the Federal Communications Commission (FCC) passed strict new rules that give the body its greatest power over the cable industry since the internet went mainstream.

FCC chairman Tom Wheeler – a former telecom lobbyist turned surprise hero of net-neutrality supporters – thanked the 4m people who had submitted comments on the new rules. “Your participation has made this the most open process in FCC history,” he said. “We listened and we learned.”

Wheeler said that while other countries were trying to control the internet, the sweeping new US protections on net neutrality – the concept that all information and services should have equal access online – represented “a red-letter day for internet freedom”.

“The internet is simply too important to be left without rules and without a referee on the field,” said Wheeler. “Today’s order is more powerful and more expansive than any previously suggested.”

Broadband providers will be banned from creating so-called “fast lanes” blocking or slowing traffic online, and will oversee mobile broadband as well as cable. The FCC would also have the authority to challenge unforeseen barriers broadband providers might create as the internet develops.

Activists and tech companies argue the new rules are vital to protect net neutrality – the concept that all information and services should have equal access to the internet. The FCC’s two Republican commissioners, Ajit Pai and Michael O’Rielly, voted against the plan but were overruled at a much anticipated meeting by three Democratic members on the panel.

Republicans have long fought the FCC’s net neutrality protections, arguing the rules will create an unnecessary burden on business. They have accused Barack Obama of bullying the regulator into the move in order to score political points, with conservative lawmakers and potential 2016 presidential candidates expected to keep the fight going well into that election campaign.

Pai said the FCC was flip-flopping for “one reason and one reason only: president Obama told us to do so”.

“This is the FCC using all the tools in our toolbox to protect innovators and consumers.”

Obama offered his support to the rules late last year, following an online activism campaign that pitched internet organisers and companies from Netflix and Reddit to the online craft market Etsy and I Can Has Cheezburger? – weblog home of the Lolcats meme – against Republican leaders and the cable and telecom lobbies.

Broadband will now be regulated under Title II of the Communications Act – the strongest legal authority the FCC has in its authority. Obama called on the independent regulator to implement Title II last year, leading to charges that he unduly influenced Wheeler’s decision that are now being investigated in Congress.

A small band of protesters gathered in the snow outside the FCC’s Washington headquarters before the meeting on Thursday, in celebration of their success in lobbying for a dramatic U-turn in regulation. Wheeler and his Democratic colleagues, Mignon Clyburn and Jessica Rosenworcel, were cheered as they sat down for the meeting.

Joining the activists outside was Apple co-counder Steve Wozniak, who said the FCC also needed more power to prevent future attacks on the open internet.

“We have won on net neutrality,” Wozniak told the Guardian. “This is important because they don’t want the FCC to have oversight over other bad stuff.”

Tim Berners Lee, inventor of the world wide web, addressed the meeting via video, saying he applauded the FCC’s decision to protect net neutrality: “More than anything else, the action you take today will preserve the reality of a permission-less innovation that is the heart of the internet.”