To date the fastest speed ever traveled by humans is just under 25,000 miles per hour. This milestone was reached by the reentry capsule from the Apollo 10 moon mission — reaching 24,961 mph as it hurtled through Earth’s upper atmosphere. Yet this pales in comparison to the speed of light, which clocks in at 186,282 miles per second, in a vacuum. A quick visit to the calculator puts Apollo 10 at 6.93 miles per second, or 0.0037 percent speed of light!

Despite our very pedestrian speeds many dream of a future where humans might reach the stars, powered by some kind of “warp drive” (yes, Star Trek comes to mind). A handful of researchers at NASA are actively pondering this today. Though, our poor level of technology combined with our lack of understanding of the workings of the universe, suggests that an Alcubierre-like approach is still centuries away from our grasp.

Beyond the security gate at the Johnson Space Center’s 1960s-era campus here, inside a two-story glass and concrete building with winding corridors, there is a floating laboratory.

Harold G. White, a physicist and advanced propulsion engineer at NASA, beckoned toward a table full of equipment there on a recent afternoon: a laser, a camera, some small mirrors, a ring made of ceramic capacitors and a few other objects.

He and other NASA engineers have been designing and redesigning these instruments, with the goal of using them to slightly warp the trajectory of a photon, changing the distance it travels in a certain area, and then observing the change with a device called an interferometer. So sensitive is their measuring equipment that it was picking up myriad earthly vibrations, including people walking nearby. So they recently moved into this lab, which floats atop a system of underground pneumatic piers, freeing it from seismic disturbances.

The team is trying to determine whether faster-than-light travel — warp drive — might someday be possible.

“Space has been expanding since the Big Bang 13.7 billion years ago,” said Dr. White, 43, who runs the research project. “And we know that when you look at some of the cosmology models, there were early periods of the universe where there was explosive inflation, where two points would’ve went receding away from each other at very rapid speeds.”

Einstein famously postulated that, as Dr. White put it, “thou shalt not exceed the speed of light,” essentially setting a galactic speed limit. But in 1994, a Mexican physicist, Miguel Alcubierre, theorized that faster-than-light speeds were possible in a way that did not contradict Einstein, though Dr. Alcubierre did not suggest anyone could actually construct the engine that could accomplish that.

His theory involved harnessing the expansion and contraction of space itself. Under Dr. Alcubierre’s hypothesis, a ship still couldn’t exceed light speed in a local region of space. But a theoretical propulsion system he sketched out manipulated space-time by generating a so-called “warp bubble” that would expand space on one side of a spacecraft and contract it on another.

“In this way, the spaceship will be pushed away from the Earth and pulled towards a distant star by space-time itself,” Dr. Alcubierre wrote. Dr. White has likened it to stepping onto a moving walkway at an airport.

But Dr. Alcubierre’s paper was purely theoretical, and suggested insurmountable hurdles. Among other things, it depended on large amounts of a little understood or observed type of “exotic matter” that violates typical physical laws.

Dr. White believes that advances he and others have made render warp speed less implausible. Among other things, he has redesigned the theoretical warp-traveling spacecraft — and in particular a ring around it that is key to its propulsion system — in a way that he believes will greatly reduce the energy requirements.

According to Star Trek fictional history warp engines were invented in 2063. That gives us just over 50 years. While very unlikely based on our current technological prowess and general lack of understanding of the cosmos, warp engines are perhaps becoming just a little closer to being realized. But, please, no photon torpedoes!

NASA scientists now think that the famous warp drive concept is a realistic possibility, and that in the far future humans could regularly travel faster than the speed of light.

A warp drive would work by “warping” spacetime around any spaceship, which physicist Miguel Alcubierre showed was theoretically possible in 1994, albeit well beyond the current technical capabilities of humanity. However, any such Alcubierre drive was assumed to require more energy — equivalent to the mass-energy of the whole planet of Jupiter – than could ever possibly be supplied, rendering it impossible to build.

But now scientists believe that those requirements might not be so vast, making warp travel a tangible possibility. Harold White, from NASA’s Johnson Space Centre, revealed the news on Sept. 14 at the 100 Year Starship Symposium, a gathering to discuss the possibilities and challenges of interstellar space travel. Space.com reports that White and his team have calculated that the amount of energy required to create an Alcubierre drive may be smaller than first thought.

The drive works by using a wave to compress the spacetime in front of the spaceship while expanding the spacetime behind it. The ship itself would float in a “bubble” of normal spacetime that would float along the wave of compressed spacetime, like the way a surfer rides a break. The ship, inside the warp bubble, would be going faster than the speed of light relative to objects outside the bubble.

By changing the shape of the warp bubble from a sphere to more of a rounded doughnut, White claims that the energy requirements will be far, far smaller for any faster-than-light ship — merely equivalent to the mass-energy of an object the size of Voyager 1.

Alas, before you start plotting which stars you want to visit first, don’t expect one appearing within our lifetimes. Any warp drive big enough to transport a ship would still require vast amounts of energy by today’s standards, which would probably necessitate exploiting dark energy — but we don’t know yet what, exactly, dark energy is, nor whether it’s something a spaceship could easily harness. There’s also the issue that we have no idea how to create or maintain a warp bubble, let alone what it would be made out of. It could even potentially, if not constructed properly, create unintended black holes. 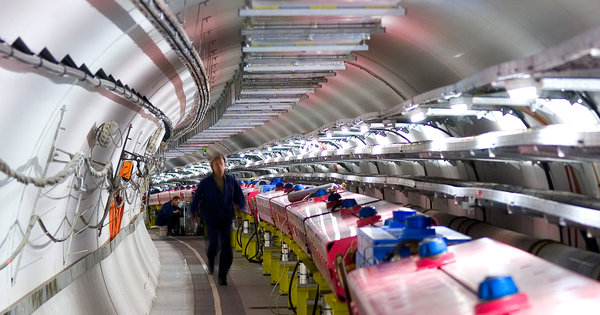 The world of particle physics is agog with recent news of an experiment that shows a very unexpected result – sub-atomic particles traveling faster than the speed of light. If verified and independently replicated the results would violate one of the universe’s fundamental properties described by Einstein in the Special Theory of Relativity. The speed of light — 186,282 miles per second (299,792 kilometers per second) — has long been considered an absolute cosmic speed limit.

Stranger still, over the last couple of days news of this anomalous result has even been broadcast on many cable news shows.

The experiment known as OPERA is a collaboration between France’s National Institute for Nuclear and Particle Physics Research and Italy’s Gran Sasso National Laboratory. Over the course of three years scientists fired a neutrino beam 454 miles (730 kilometers) underground from Geneva to a receiver in Italy. Their measurements show that neutrinos arrived an average of 60 nanoseconds sooner than light would have done. This doesn’t seem like a great amount, after all is only 60 billionths of a second, however the small difference could nonetheless undermine a hundred years of physics.

Understandably most physicists remain skeptical of the result, until further independent experiments are used to confirm the measurements or not. However, all seem to agree that if the result is confirmed this would be a monumental finding and would likely reshape modern physics and our understanding of the universe.

[div class=attrib]More on this intriguing story here courtesy of ARs Technica, which also offers a detailed explanation of several possible sources of error that may have contributed to the faster-than-light measurements.[end-div]