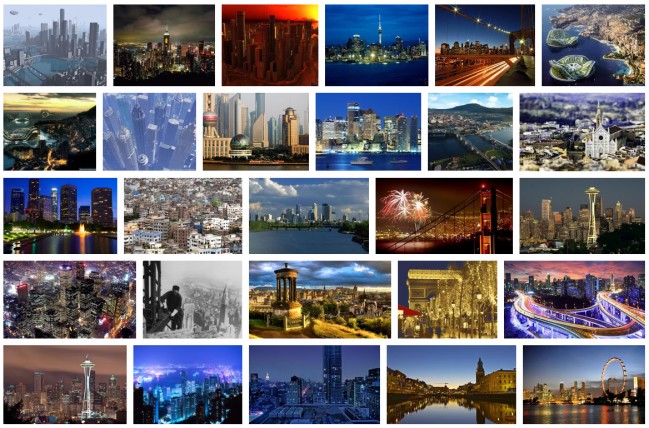 Big data keeps getting bigger and computers keep getting faster. Some theorists believe that the universe is a giant computer or a computer simulation; that principles of information science govern the cosmos. While this notion is one of the most recent radical ideas to explain our existence, there is no doubt that information is our future. Data surrounds us, we are becoming data-points and our cities are our information-rich databases.

IN 1995 GEORGE GILDER, an American writer, declared that “cities are leftover baggage from the industrial era.” Electronic communications would become so easy and universal that people and businesses would have no need to be near one another. Humanity, Mr Gilder thought, was “headed for the death of cities”.

It hasn’t turned out that way. People are still flocking to cities, especially in developing countries. Cisco’s Mr Elfrink reckons that in the next decade 100 cities, mainly in Asia, will reach a population of more than 1m. In rich countries, to be sure, some cities are sad shadows of their old selves (Detroit, New Orleans), but plenty are thriving. In Silicon Valley and the newer tech hubs what Edward Glaeser, a Harvard economist, calls “the urban ability to create collaborative brilliance” is alive and well.

Cheap and easy electronic communication has probably helped rather than hindered this. First, connectivity is usually better in cities than in the countryside, because it is more lucrative to build telecoms networks for dense populations than for sparse ones. Second, electronic chatter may reinforce rather than replace the face-to-face kind. In his 2011 book, “Triumph of the City”, Mr Glaeser theorises that this may be an example of what economists call “Jevons’s paradox”. In the 19th century the invention of more efficient steam engines boosted rather than cut the consumption of coal, because they made energy cheaper across the board. In the same way, cheap electronic communication may have made modern economies more “relationship-intensive”, requiring more contact of all kinds.

Recent research by Carlo Ratti, director of the SENSEable City Laboratory at the Massachusetts Institute of Technology, and colleagues, suggests there is something to this. The study, based on the geographical pattern of 1m mobile-phone calls in Portugal, found that calls between phones far apart (a first contact, perhaps) are often followed by a flurry within a small area (just before a meeting).

A third factor is becoming increasingly important: the production of huge quantities of data by connected devices, including smartphones. These are densely concentrated in cities, because that is where the people, machines, buildings and infrastructures that carry and contain them are packed together. They are turning cities into vast data factories. “That kind of merger between physical and digital environments presents an opportunity for us to think about the city almost like a computer in the open air,” says Assaf Biderman of the SENSEable lab. As those data are collected and analysed, and the results are recycled into urban life, they may turn cities into even more productive and attractive places.

Some of these “open-air computers” are being designed from scratch, most of them in Asia. At Songdo, a South Korean city built on reclaimed land, Cisco has fitted every home and business with video screens and supplied clever systems to manage transport and the use of energy and water. But most cities are stuck with the infrastructure they have, at least in the short term. Exploiting the data they generate gives them a chance to upgrade it. Potholes in Boston, for instance, are reported automatically if the drivers of the cars that hit them have an app called Street Bump on their smartphones. And, particularly in poorer countries, places without a well-planned infrastructure have the chance of a leap forward. Researchers from the SENSEable lab have been working with informal waste-collecting co-operatives in São Paulo whose members sift the city’s rubbish for things to sell or recycle. By attaching tags to the trash, the researchers have been able to help the co-operatives work out the best routes through the city so they can raise more money and save time and expense.

Exploiting data may also mean fewer traffic jams. A few years ago Alexandre Bayen, of the University of California, Berkeley, and his colleagues ran a project (with Nokia, then the leader of the mobile-phone world) to collect signals from participating drivers’ smartphones, showing where the busiest roads were, and feed the information back to the phones, with congested routes glowing red. These days this feature is common on smartphones. Mr Bayen’s group and IBM Research are now moving on to controlling traffic and thus easing jams rather than just telling drivers about them. Within the next three years the team is due to build a prototype traffic-management system for California’s Department of Transportation.

Cleverer cars should help, too, by communicating with each other and warning drivers of unexpected changes in road conditions. Eventually they may not even have drivers at all. And thanks to all those data they may be cleaner, too. At the Fraunhofer FOKUS Institute in Berlin, Ilja Radusch and his colleagues show how hybrid cars can be automatically instructed to switch from petrol to electric power if local air quality is poor, say, or if they are going past a school.

Jane Brody over at the Well blog makes a compelling case for the dismantling of suburbia. After all, these so-called “built environments” where we live, work, eat, play and raise our children, are an increasingly serious health hazard.

Developers in the last half-century called it progress when they built homes and shopping malls far from city centers throughout the country, sounding the death knell for many downtowns. But now an alarmed cadre of public health experts say these expanded metropolitan areas have had a far more serious impact on the people who live there by creating vehicle-dependent environments that foster obesity, poor health, social isolation, excessive stress and depression.

As a result, these experts say, our “built environment” — where we live, work, play and shop — has become a leading cause of disability and death in the 21st century. Physical activity has been disappearing from the lives of young and old, and many communities are virtual “food deserts,” serviced only by convenience stores that stock nutrient-poor prepared foods and drinks.

According to Dr. Richard J. Jackson, professor and chairman of environmental health sciences at the University of California, Los Angeles, unless changes are made soon in the way many of our neighborhoods are constructed, people in the current generation (born since 1980) will be the first in America to live shorter lives than their parents do.

Although a decade ago urban planning was all but missing from public health concerns, a sea change has occurred. At a meeting of the American Public Health Association in October, Dr. Jackson said, there were about 300 presentations on how the built environment inhibits or fosters the ability to be physically active and get healthy food.

In a healthy environment, he said, “people who are young, elderly, sick or poor can meet their life needs without getting in a car,” which means creating places where it is safe and enjoyable to walk, bike, take in nature and socialize.

“People who walk more weigh less and live longer,” Dr. Jackson said. “People who are fit live longer. People who have friends and remain socially active live longer. We don’t need to prove all of this,” despite the plethora of research reports demonstrating the ill effects of current community structures.

In 2007 UPS made the headlines by declaring left-hand turns for its army of delivery truck drivers undesirable. Of course, we left-handers have always known that our left or “sinister” side is fatefully less attractive and still branded as unlucky or evil. Chinese culture brands left-handedness as improper as well.

UPS had other motives for poo-pooing left-hand turns. For a company which runs over 95,000 big brown delivery trucks optimizing delivery routes could result in tremendous savings. In fact, careful research showed that the company could reduce its annual delivery routes by 28.5 million miles, save around 3 million gallons of fuel and reduce CO2 emissions by over 30,000 metric tons. And, eliminating or reducing left-hand turns would be safer as well. Of the 2.4 million crashes at intersections in the United States in 2007, most involved left-hand turns, according to the U.S. Federal Highway Administration.

Now urban planners and highway designers in the United States are evaluating the same thing — how to reduce the need for left-hand turns. Drivers in Europe, especially the United Kingdom, will be all too familiar with the roundabout technique for reducing left-handed turns on many A and B roads. Roundabouts have yet to gain significant traction in the United States, so now comes the Diverging Diamond Interchange.

. . . Left turns are the bane of traffic engineers. Their idea of utopia runs clockwise. (UPS’ routing software famously has drivers turn right whenever possible, to save money and time.) The left-turning vehicle presents not only the aforementioned safety hazard, but a coagulation in the smooth flow of traffic. It’s either a car stopped in an active traffic lane, waiting to turn; or, even worse, it’s cars in a dedicated left-turn lane that, when traffic is heavy enough, requires its own “dedicated signal phase,” lengthening the delay for through traffic as well as cross traffic. And when traffic volumes really increase, as in the junction of two suburban arterials, multiple left-turn lanes are required, costing even more in space and money.

And, increasingly, because of shifting demographics and “lollipop” development patterns, suburban arterials are where the action is: They represent, according to one report, less than 10 percent of the nation’s road mileage, but account for 48 percent of its vehicle-miles traveled.

. . . What can you do when you’ve tinkered all you can with the traffic signals, added as many left-turn lanes as you can, rerouted as much traffic as you can, in areas that have already been built to a sprawling standard? Welcome to the world of the “unconventional intersection,” where left turns are engineered out of existence.

. . . “Grade separation” is the most extreme way to eliminate traffic conflicts. But it’s not only aesthetically unappealing in many environments, it’s expensive. There is, however, a cheaper, less disruptive approach, one that promises its own safety and efficiency gains, that has become recently popular in the United States: the diverging diamond interchange. There’s just one catch: You briefly have to drive the wrong way. But more on that in a bit.

The “DDI” is the brainchild of Gilbert Chlewicki, who first theorized what he called the “criss-cross interchange” as an engineering student at the University of Maryland in 2000.

The DDI is the sort of thing that is easier to visualize than describe (this simulation may help), but here, roughly, is how a DDI built under a highway overpass works: As the eastbound driver approaches the highway interchange (whose lanes run north-south), traffic lanes “criss cross” at a traffic signal. The driver will now find himself on the “left” side of the road, where he can either make an unimpeded left turn onto the highway ramp, or cross over again to the right once he has gone under the highway overpass.